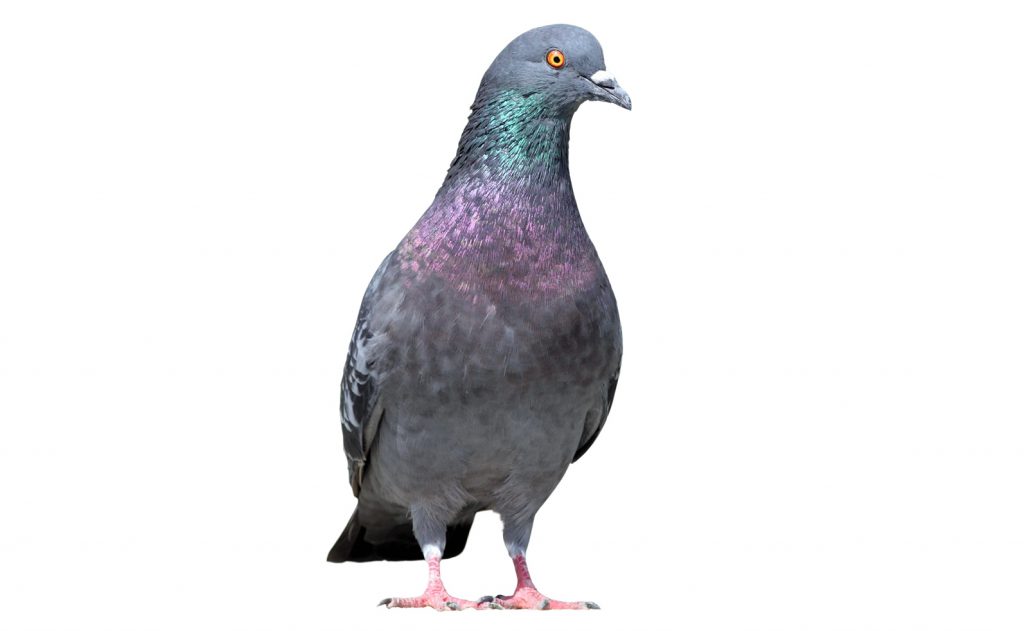 Originally descended from the rock dove, which is why they prefer to nest high up on buildings and other structures on ledges. The feral pigeon is found throughout the UK and almost throughout worldwide.

Pigeons can vary in colour with mixes of blue, grey, white, black, brown and red being possible. They are about 300 to 350mm in size weighing between 275 to 550 grams.

The peak breeding season is from March through to July but usually breed throughout the year. Usually lays two off white eggs laid on consecutive days in a nest made of twigs, grass or even plastic including cable ties etc. The incubation period is approximately 18 days with the young fledged after about 30 days. The breeding population is often supplemented by escaped racing pigeons.

Feral pigeons are often in flocks, which can number several hundred and sometimes encouraged by members of the public feeding them bird seed, etc. Usually thought of as an urban dweller but can be often found on farms, particularly roosting inside farm buildings.

Accumulation of bird guano along with nesting material and feathers can cause issues of safety such as slip risks and possible disease transmission.

How we control Feral Pigeons

We employ various methods, some of which may be employed together to control complex situations. It may be that a simple matter of exclusion from a roof space by repairing a hole could be carried out. Other situations will require the installation of barriers anti-perching points or nets to prevent birds gaining access to ledges on flat roof areas.

Areas where this is not practical such as wide open spaces may require the need of flock reduction by using humane live capture traps situated in discrete areas from risk of tampering. These are initially baited with a corn mixture and left open for birds to feed comfortably. Once conditioned to feeding in this area they can be set, with a fully trained technician returning within 24 hours to remove the birds and release any non-target species back into the wild. This method should only be used as a last option and when all other methods have been considered and deemed impractical.

Alternative methods of disposal such as using trained birds of prey in a falconry situation, these birds are predators and as such will give chase. Sometimes merely the sight of a hawk will startle birds to flee an area. This method of control can be very effective but is intensive and not suitable for every situation.