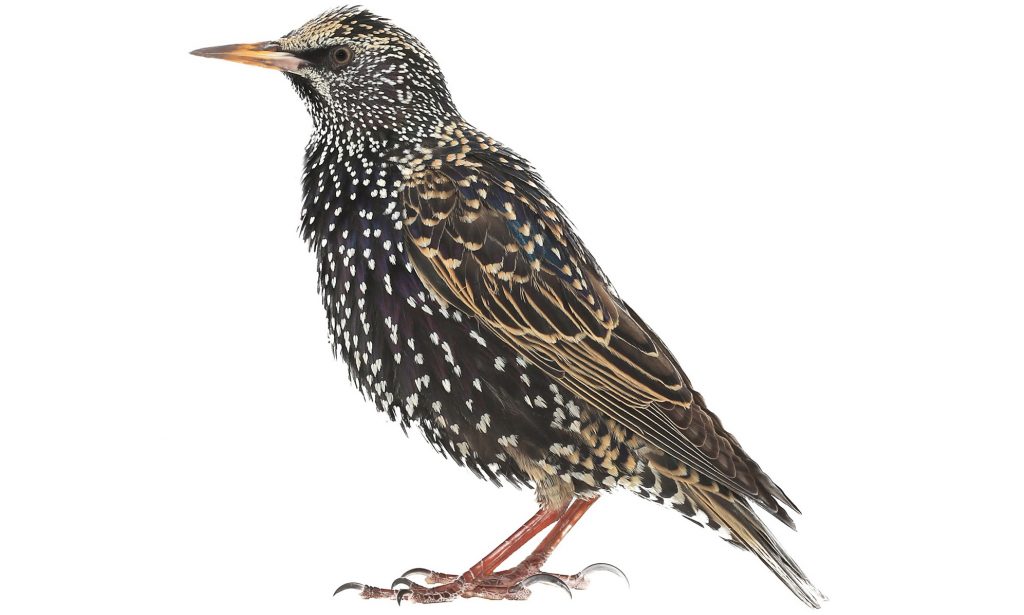 Resident population of approximately 4 million pairs breed in the UK annually with another 30 million migrating to the UK from Northern and Eastern Europe every year. Recent studies have suggested that the number of resident starlings is in decline. It has also been introduced to Australia, New Zealand, North America and South Africa.

Starlings have a black with green plumage with a purple iridescence and pale spots in the winter months. They are about 220mm in size weighing about 73 -98 grams.

Starlings breed from April onwards and can lay a clutch of 4 small pale blue eggs in a large nest made from grass. The incubation period is between 11 – 13 days with the young fledged after 21 – 22 days. Breeding pairs may have a second clutch.

A common sight of large numbers of birds in a flock with sometimes more than a million birds gathering in night roosts. This communal roosting starts from late summer until the flock breaks up the following year when the breeding season arrives.

Starlings can be a serious nuisance by roosting on buildings with accumulation of guano deposits as well as nesting often in roof voids of buildings including domestic properties.

How we control Starlings

Starlings are protected under the Wildlife and Countryside Act 1981, under this legislation all wild birds, their eggs and nests are protected. Under this legislation all birds, eggs or nests (when in use or being built) cannot be taken or destroyed or birds killed or taken, except under licence. Individual licences are granted by Natural England to tackle a specific problem, within a specific period of time, in an agreed manner. These applications are assessed on a case by case basis and without a licence it is illegal.

Where birds are roosting on buildings or other structures it is possible to proof these with physical barriers such as installing netting to protect areas. Other methods include dispersal techniques such as the use of playing distress calls with acoustic devices and falconry techniques with the use of trained birds of prey.