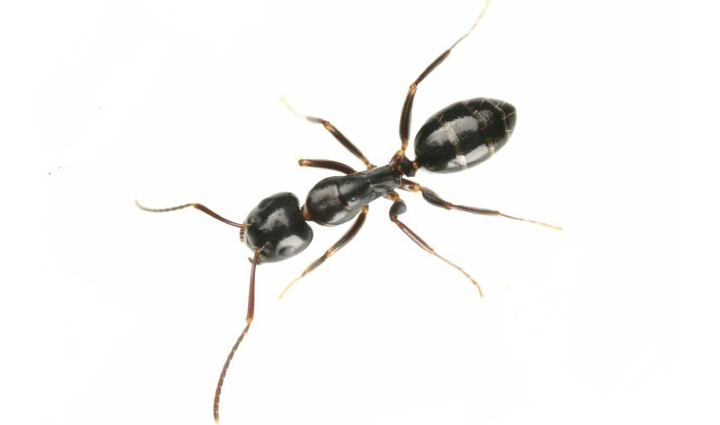 Found in many parts of the world and throughout Europe and the UK.

Adult workers are between 3 – 5 mm long, with the queens (which are winged at first before shedding them) approximately 12 mm in length. Shiny brown/black in colour with elbowed antennae, slender thorax and waist with long legs.

The new colony begins with a mated female ant digging into the earth to produce the start of a nest. She lays a variable number of eggs, white in colour that hatch about 3 – 4 weeks later. The white legless grubs pupate about 3 weeks later about 2 weeks later adult ants emerge. The first generation are completely worker ants, which are required to tend to the queen and the nest. Many thousands of ants can be contained in a nest colony and later in the summer months winged males and female ants leave the nest site to mate in the air. The males die after mating while the young fertile females try to find a new nest site.

Black ants are a temperate species forming nests in gardens within the soil, under patios, paving, in foundations and sometimes even in buildings (under floors or within walls). One queen forms the nest colony with many hundreds of worker ants actively foraging and tending to the nest site. Food will consist of anything sweet including aphid secretions, seeds and other insects. Colonies can live for many years.

Foraging worker ants often become a nuisance, particularly when attracted to food products in kitchens. Can also be a problem when nests ‘erupt’ with large numbers of ‘flying’ ants close to buildings. Black ants guard aphids, which can damage plants.

How we control Black Garden Ants

It is essential that the nest is located, where upon it is a simple procedure of treating the nest site with a suitable insecticide applied by a fully trained technician using a hand held compression sprayer, which kills on contact. However, this is not always possible and in these circumstances applying a residual insecticide to wall to floor junctions, window sills, around pipes and cracks and crevices as a barrier treatment can be effective, but is not guaranteed. Other methods are the use of bait placement along areas of trailing or foraging activity. The ants see this as a food source and are attracted to taking this back to the nest site where control can be at source.