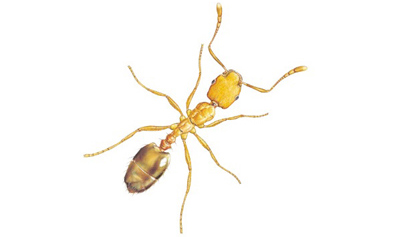 Originated probably from North Africa or the Mediterranean area, they are now world-wide and becoming common in the UK. There are also a number of other ants that are present in the UK, some that are tropical in origin, that are sometimes mistaken for pharaoh’s ants either due to their size or colouration such as:

Pharaoh’s ants are named in the mistaken belief that the ant was responsible for one of the plagues of Egypt. Workers are up to 2 mm in length and are a pale straw yellow colour with a dark large head and abdomen. They have noticeable black eyes and a twin bulged section on the waist. Queens are darker and larger up to 3.6 mm, winged when they first emerge and then lost. Males are about 3 mm in size and are black in colour having wings.

Pharaoh’s ants prefer to nest in warm humid areas, their optimum temperature is 30°C with their minimum development temperature being 18°C. Eggs laid by multiple queens within each colony hatch in approximately 1 – 2 weeks. The larvae are fully grown in about 3 – 4 weeks after which they pupate. Pupae are guarded within the nest by workers and fully formed ants emerge after about 2 weeks living up to 16 weeks. Queens have a lifespan of up to 10 months. Nest colonies have been found with up to 50,000 workers.

Pharaoh’s ants are a tropical species and are only found in heated buildings in the UK. Many queens are within a nest colony, which is large and unstructured in a cavity or heating duct. Workers are often seen trailing between the nest site and food sources, foraging on a wide range of food products. Satellite colonies are often formed with workers and queens leaving the main nest with broods, causing infestations to become problematic.

Foraging ants may carry disease organisms and can contaminate food and sterile equipment such as in hospitals. Due to their small size and ability to chew they can easily penetrate food packaging and have the ability to travel around buildings through voids, channels, ducting etc. Satellite nests can be transported, particularly when disturbed such as applying insecticides by spraying.

How we control Pharaoh’s Ants

Pharaoh’s ant colonies are very complex and control can take many months to achieve. Bait placement is undertaken along ant trails and where foraging is taking place, a full survey of the premises will enable these areas to be identified. Bait is seen as food to the foraging workers and will take this back to the nest site where upon the feeding queens will become sterile. The workers live out their natural life cycle with the colony population slowly collapsing. Sometimes it may be necessary to treat adjoining properties to achieve adequate control and eradication.