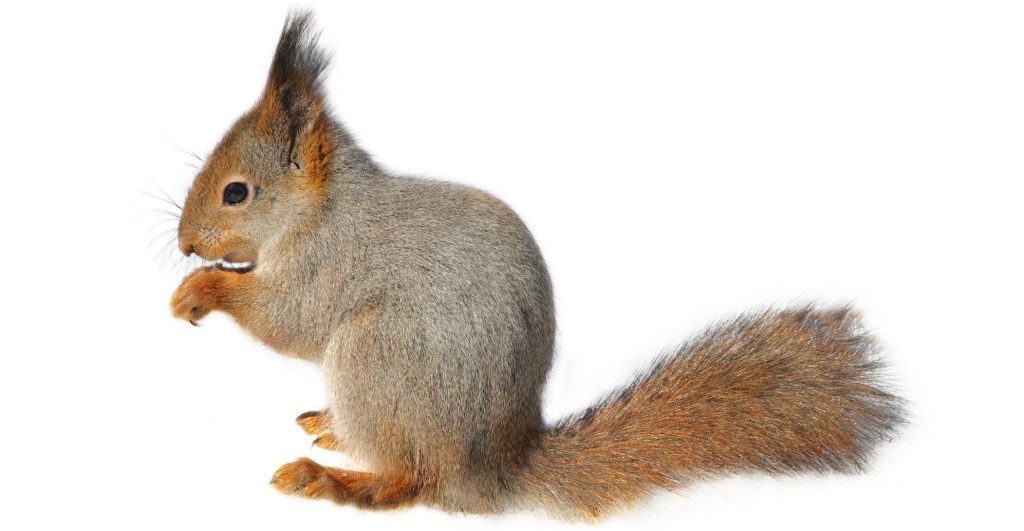 The grey squirrel was introduced into the UK between 1876 and 1929 from North America. It has now spread throughout most of England and Wales where it is common.

The grey squirrel has a grey tail and back with sometimes reddish flanks. It has a body length approximately 25 cm and a tail length 19 – 25 cm. The large bushy tail is used for balance and is a good climber with sharp claws for gripping. It has a body weight between 450 – 600 grams and both sexes are of similar weight.

Grey squirrels can have between 2 – 4 litters per year with an average litter size of 3 – 4 young. The breeding season is usually between February and March and between June and July. The life span as an average is two years with maturity reached at 10 – 12 months.

Grey squirrels can eat a variety of foods within its diet. They eat nuts, flowers, tree shoots, bark, fruit, vegetables, insects and birds eggs. Often they will take their food to a fence post or tree stump to feed and will bury food to return later.

Outside they can cause damage to trees and fruit and vegetable crops. If gaining access to a roof space they can cause considerable damage to electrical cables through gnawing presenting a risk of causing fires. They often chew woodwork, ceilings, damage insulation as well as contaminating water tanks.

How we control Grey Squirrels

Exclusion from buildings is our first priority but sometimes may not be possible. Other measures include rodenticide control (poisoning) and trapping. Trapping squirrels can take many days or weeks and we use a combination of different traps such as humane live capture traps (which have to be inspected daily) and spring traps such as Fenn and Kania traps. These are placed in safe locations away from interference and possible accidents and in accordance with legislation requirements such as roof spaces and tunnels. Rodenticide poisoning is also sometimes undertaken but this also has to abide by strict controls, particularly if used outdoors. The poison bait acts as an anti-coagulant, but is used as a last option due to potential smell, or fly activity (if in a roof space) or secondary poisoning of other animals if used outdoors.